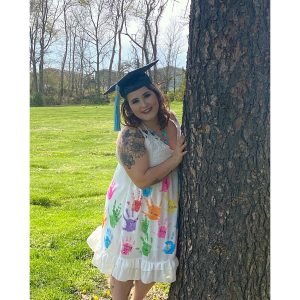 Hi! My name is Miranda Cunningham, I am a 2022 graduate from Ohio University. I received my Bachelors of Science in Early Childhood Education. For the past 3 years I have been a member of the CCMEP program. I joined the CCMEP program during my freshman year of college when my father passed suddenly. I was nervous getting help and asking for help at first, but Kelcea, my case manager, made me realize it’s not bad to need help. The staff for the CCMEP program accepted my brother and I with open arms. I honestly am not sure where I would be right now without the CCMEP program. Kelcea helped me every step of the way when I had questions, issues, and much more. The CCMEP program covered my gas when I had to drive 45 minutes one way every day freshman year. They covered books, tests, gas, materials, and so much more! I would highly recommend the CCMEP program to anyone in need of assistance. Special thanks for the Jefferson County Community Action Council for their dedication to this program.
Miranda is currently working at Rock Day School in Toronto, Ohio as a Preschool teacher! 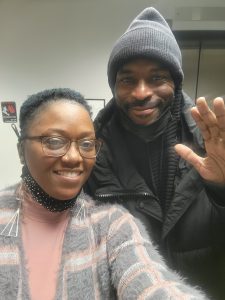 Jamar Martin was incarcerated 1/24/2017 for Robbery and was released 12/16/21.  This individual was very eager to gain employment.  Jamar said he has never heard of anything like Pathway Homes.  He stated it’s not that he needed a babysitter but most of the time when you’re released from prison, there are not many people by your side or encouragement.  He stated that the Navigator Duckworth’s positive attitude made him feel like he could be successful this time. The employment position that he wanted to do was in Delaware, Ohio.  Jamar set the expectation that he already had the job but just had to get there.  Navigator Duckworth told him we can make an alternate plan in case we would not be successful with his transportation to his requested job location.  Navigator provided Mr. Martin with Vernise Robinson’s (ODRC Human Services Program Admin) contact number as backup if we had to find employment closer to his home area here in Franklin County.  This was a 40-minute drive from his home to the job but he did not want to give up.

This Navigator sat one on one with him in the OMJ center and recommended he commute on the COTA as far as it would transport him and asked him to see if his employer wouldn’t mind picking him up the rest of the way.  Mr. Martin’s employer saw how ambitious Jamar was and stated ok.  His employer has been transporting him the rest of the way to his job at CCONIY & EZPLUCKER in Deleware, Ohio.  He has been working there since 12/23/21 and makes $15 per hour.

Jamar stated he currently is working to pay off debts, getting his license, his own apartment and a vehicle.  He is currently living with his sister and stated that he wants to do things the correct way.  He does not want to drive while not having a license. He is currently working and saving his funds. Navigator asked if he was thinking of furthering his education and Jamar expressed that he would like to complete the Edwins Culinary Program in Cleveland, Ohio, as he started this class while being incarcerated.  Navigator informed Mr. Martin that housing is included but he would have to make a sacrifice to better himself in choosing a career that he really loves.  He stated he will think about that because he has always wanted to be a chef but he would feel more comfortable having his license and his own vehicle.

Jamar has received his 4th gift card incentive for being on the job over 60 days.  Jamar was not expecting what he calls “The blessing” incentive gift cards.  He stated that he is so grateful, and he has the determination and encouragement to believe that he can do it himself 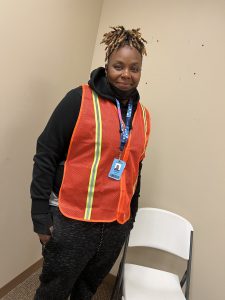 Participant Andrea Goss is currently at the Oriana House in Cleveland, Ohio

Andrea’s charges were involuntary manslaughter and aggravated robbery. While serving her prison sentence, she earned her GED and Associate Degree. Ms. Goss trained dogs in her spare time in prison from 2004-to 2021. Ms. Goss started her job at Amazon on February 20, 2022; she will start a new career on April 4, 2022. She is scheduled to move into her apartment on April 1, 2022. She signed up, and her pending start date of April 12, 2022, for her Bachelor’s Degree in Business management. Her goal is to start a local business training dogs as a side job. Andrea has also assisted other peers and encouraged them to join the pathway home program. She shows a passion for helping people. I meet with her weekly our agenda includes credit repair, life insurance, understanding her paystub, 401K, and a list of other life skills services.

Ms. Goss and Navigator Sherena have worked together to ensure she meets and maintains her goals. We meet twice a week to work on life skills such as budgeting, credit awareness, proper eating habits, and understanding life skills outside of prison. Ms. Goss is a pleasure to work with, and she always tends to have a positive attitude all the time.

The Housing Department received a referral on behalf of Clint Eisnicher from Doug Gosney case-manager for the OPIOID-3 Program in early October 2021. Clint was incarcerated and due to being released shortly the housing department determined that Clint was eligible for rental assistance through the Homeless Crisis Response Program. Clint located a rental unit and received assistance with a Security Deposit and three months of rent. The housing Department also paid water and electric deposits and the referred Clint to the HEAP Department to get set up on PIPP for his gas and electric and first month bill. While in HEAP, Clint was also referred to Emergency Services to get emergency food assistance through CSBG.

During the three months Clint received housing assistance, he was able to obtain employment and use his income to get his driver’s license reinstated and purchase a vehicle, leading to a better paying job. Clint was able to pay his own rent for February and is fully self-sustaining. He would not  have been able to achieve so much in such a short amount of time without the help of the CAC programs and staff to transition him from incarceration to self-sufficiency.

CCMEP participant Ashley Durbin attended Xavier University for the RN program. She graduated in December 2021 and took her state board test and passed. Within a month she had 2 interviews at her top two choices and was offered a position for both. She accepted her top choice working at a branch at Cleveland Clinic in the Emergency Department. She is making a self-sufficient wage of $29-$35/hr. depending on the shift. She is currently receiving benefits and Paid Time Off. The employer offered her no less than 36 hours a week.